Not much is changing in the global economy on the surface. The U.S. economy keeps on running overheated, Europe and the EMs are lagging behind. Inflationary pressure is distributed respectively: most of it is in the United States, very little in Europe, and emerging markets are a mixed bag. This has been a good description for the broad macroeconomic situation for the past 3-6 months. However, things get much more interesting as we get into details. 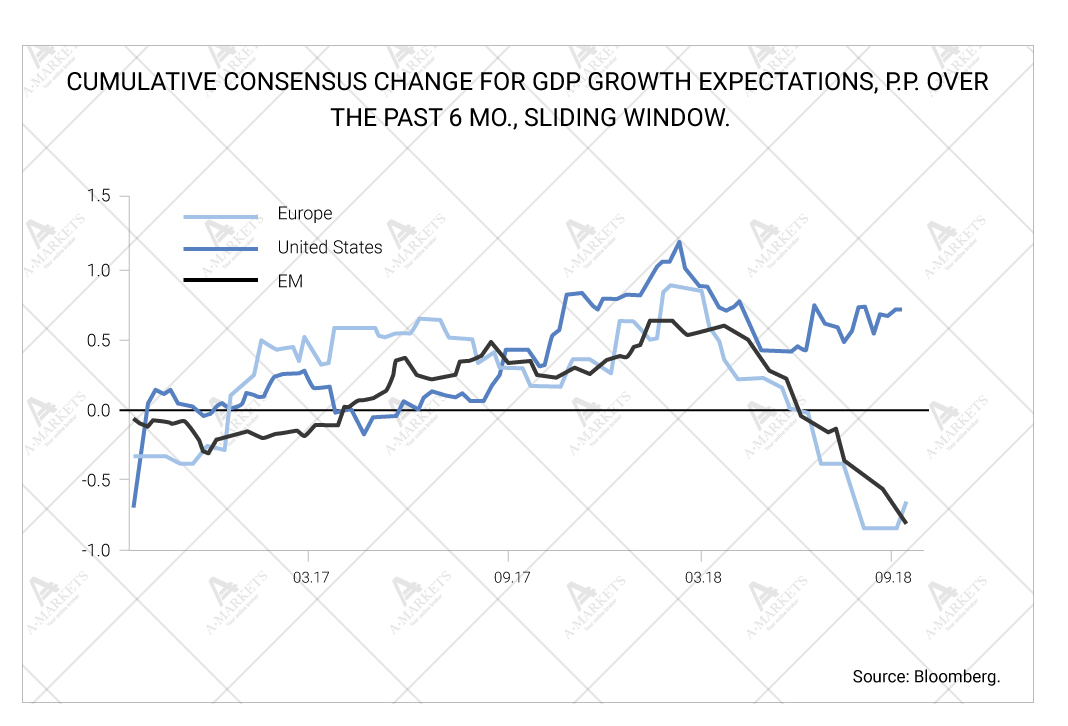 For one, the resilience of the American economy and markets in the face of the Fed tightening has been spectacular. Yes, there is always that part of the cycle where growth is just strong enough to withstand most headwinds, including rising rates, and this is exactly where the U.S. currently stands. But a large part of this nowadays is due to the Donald Trump’s tax reform. In academic terms, he is running a very loose fiscal policy, and the monetary policy will have to balance this out.

Judging by the market behavior, the scale of fiscal policy loosening has been greater than that of monetary tightening. This fuels expectations of faster GDP growth, increasing corporate profits, and is feeding into the relentless stock market rally (now the longest on record). Early signs of the fundamental damage that Trump policies are inflicting on the dollar have emerged too. 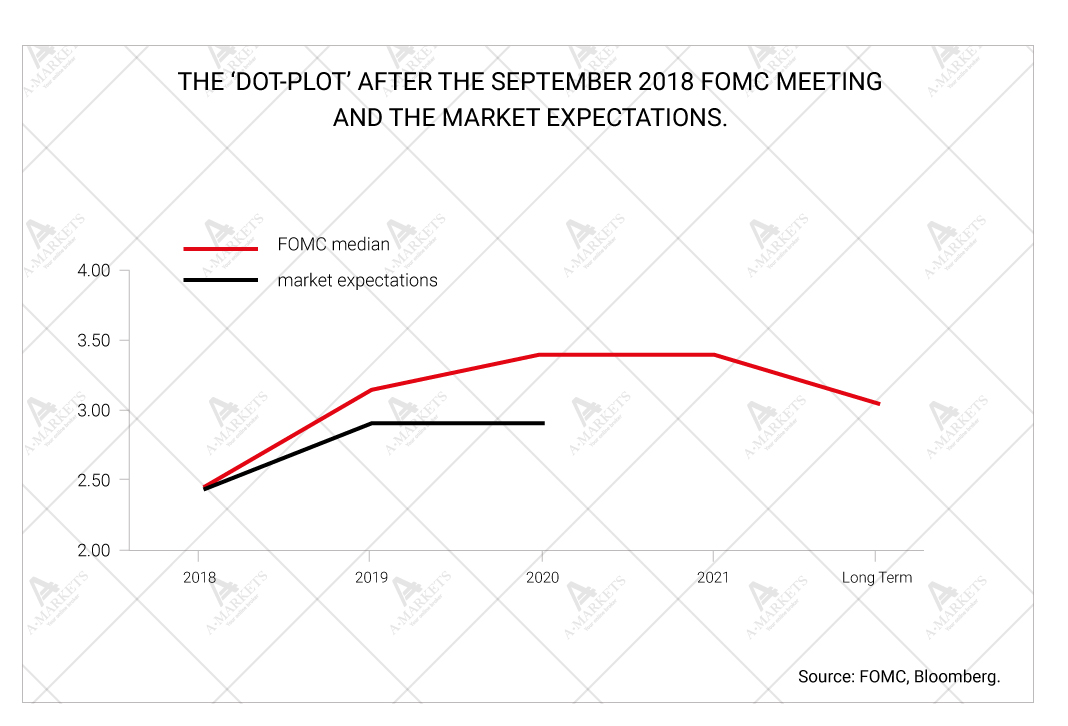 The magnitude of the imbalance is only just becoming apprehensible, but the consequences are clear. Because the fiscal policy is not getting less expansive anytime soon, the Federal Reserve will have to compensate. We now forecast a slow reassessment of the Fed’s plans. Governors have long expressed the view that markets are underestimating future rate levels. Recently some have also stated that the present environment warrants restrictive policy, therefore implying the fed funds will have to go beyond the neutral level.

Importantly, there has been a notable revision to that neutral level (often referred to as the ‘r*’). The concept is very academic and is primarily used by theoreticians. The idea behind it is to define the level of short-term rates that neither stimulate nor slow down the economy. The word ‘real’ means that the rate is calculated after adjusting for inflation. 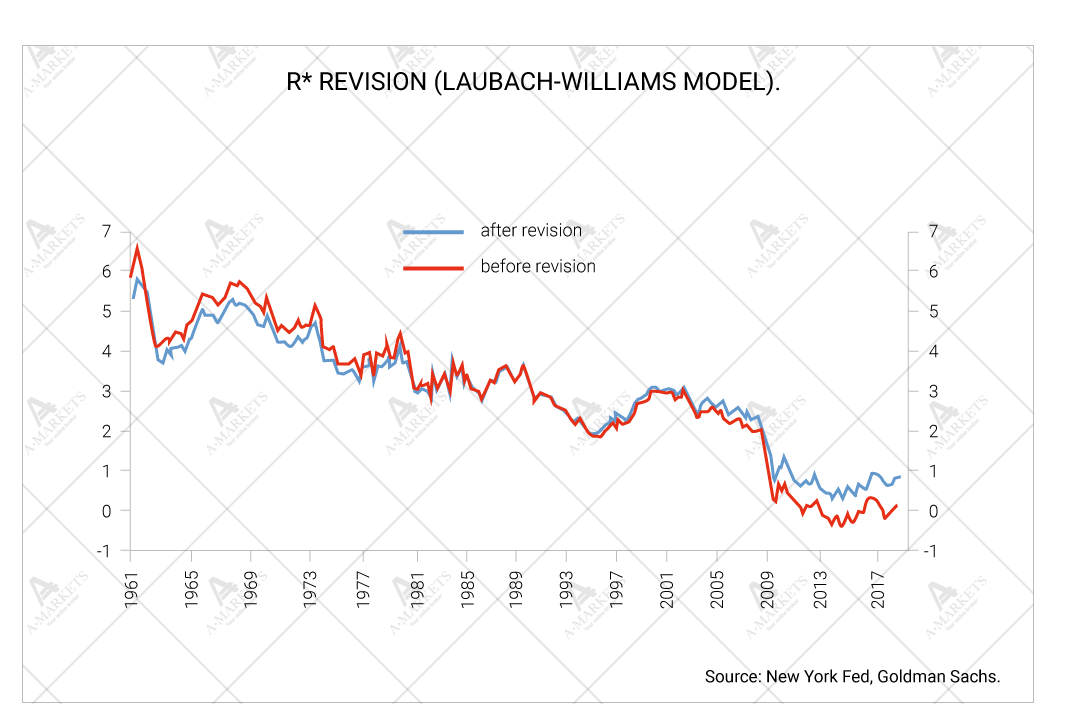 Although the average reader is not expected to be familiar with the concept, we’d like to point out its practical significance. Despite the fact that the numerical estimate is not too precise, it often serves as the starting point when conducting monetary policy in practice. And this rate has been revised up from 0.1% to 0.9%. With inflation running at 2.3% yoy, this means that the neutral rate currently sits at 3.2%. The Fed has already committed to bringing the fed funds target into that area, but the market has not discounted that yet. Furthermore, if we are talking restrictive monetary policy, then 3-3.25% is not the limit.

The Fed has already started preparing markets for a higher r* by slightly raising its view of the fair longer-term rate at the September meeting (from 2.875% to 3.00%). Out base case scenario is for the fed funds target to reach 3.5-3.75% by 2H 2020, with either three hikes in 2019 and then two in 2020, or four hikes in 2019 and one in 2020. The exact path to 3.5-3.75% will depend, in particular, on the outcome of the midterm elections. If Republicans manage to maintain the over the Congress, the Fed might update its language as early as this December, and add the 4th hike to the next year’s schedule. Going forwards, should there be no material fallout related to slower EM (and specifically China) growth, the rate is to hit 3.75-4% by the end of 2020. 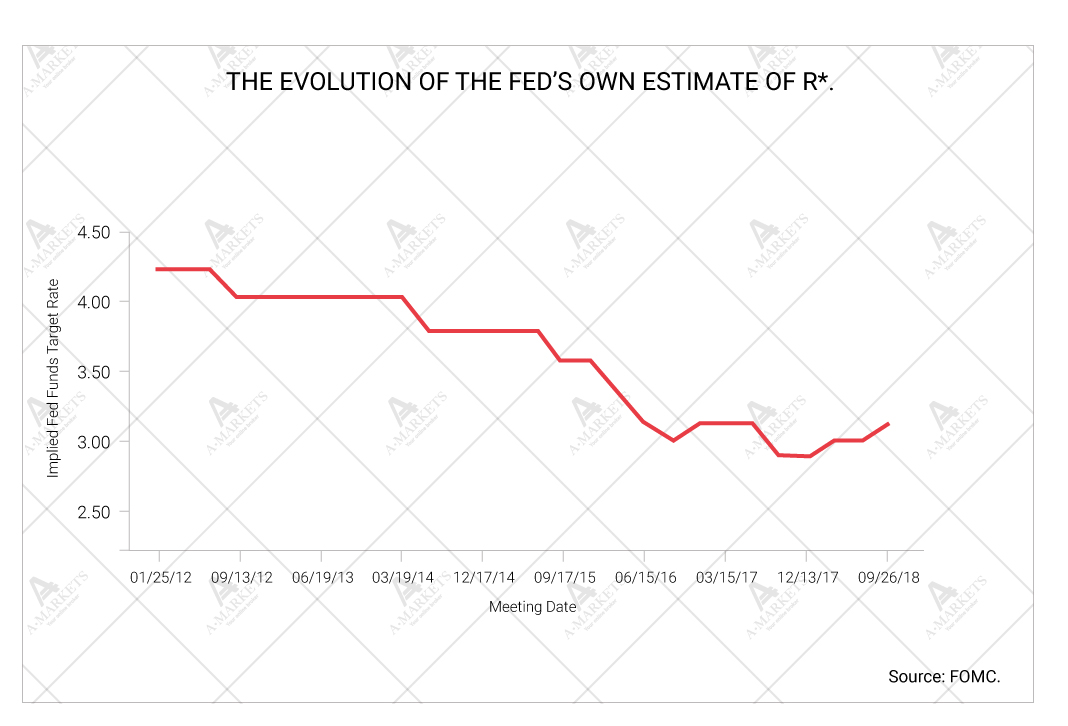 This, of course, will be a positive development for the dollar, and detrimental to the EM-bloc. These countries have borrowed heavily exploiting extremely low U.S. rates. As a matter of a fact, the volume of dollar-denominated debt in the EM has more than doubled, from $1.7 trln in 2007 to about $4.5 trln in 2018. As rates go up and growth slows, the weakest of the emerging markets are facing tremendous challenges. The cases of Turkey and Argentina were covered extensively in the previous edition of this publication, and the upcoming victims were listed too. We have little doubt that this forecast is to materialize.

The repricing of U.S. rates should also lend some support to the dollar versus its G7 counterparts, but a rapid appreciation is less likely here. Europe and Japan who are likely to finance a greater amount of the Trump’s budget deficit, and this will require a relatively weak USD. And by ‘weak’ we simply mean not as strong as the rate differentials would suggest. Last month we also noted that the short-term fundamentals were all in the dollar’s favor. But in spite of that, the EUR is still trading at $1.16 as per moment of writing. 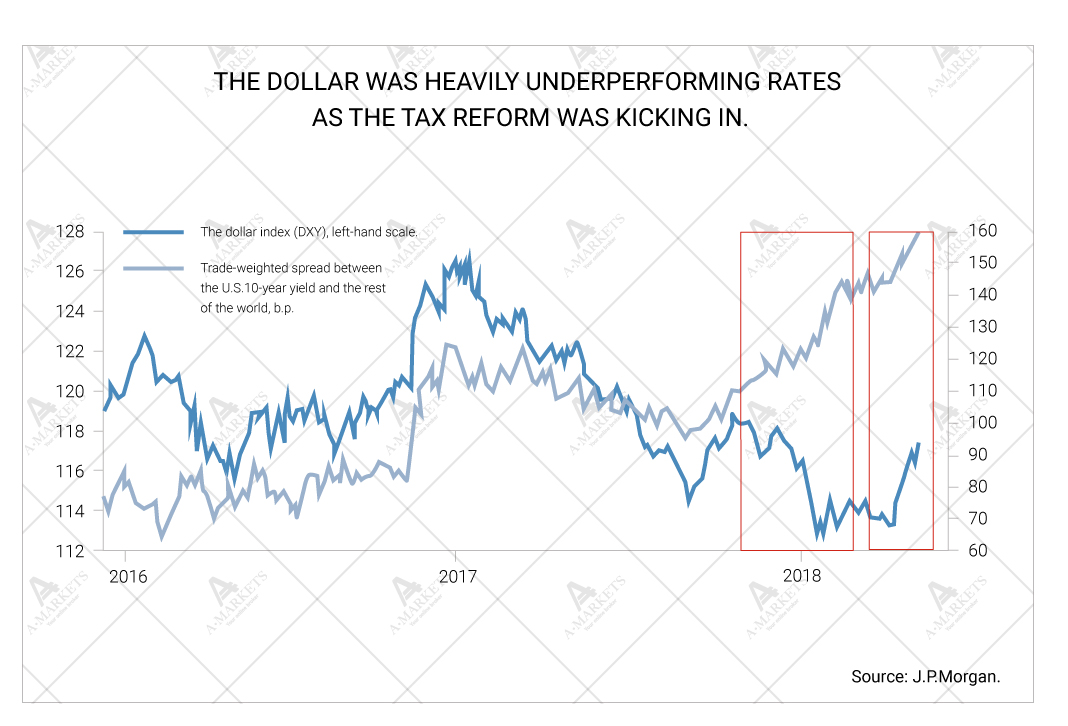 Last but not the least, gold is another sign that significantly higher USD rates are coming. The weakness across precious metals has been persistent since the February 2018 treasury sell-off, when yields jumped. Given that fundamental inflation pressure is still quite timid, the fed’s monetary policy and market rates will be the primary drivers for gold and silver over the course of 2018-H1 2019 (given there are no surprises on the geopolitical front, which can not be ruled out and/or forecast). Gold is likely to drop below $1100 by the year-end, and might test the $1000 mark in 2019, as investors realize that the Fed’s hawkishness is for serious.

EURUSD and the DXY: a bit more clarity, but still no breakout. 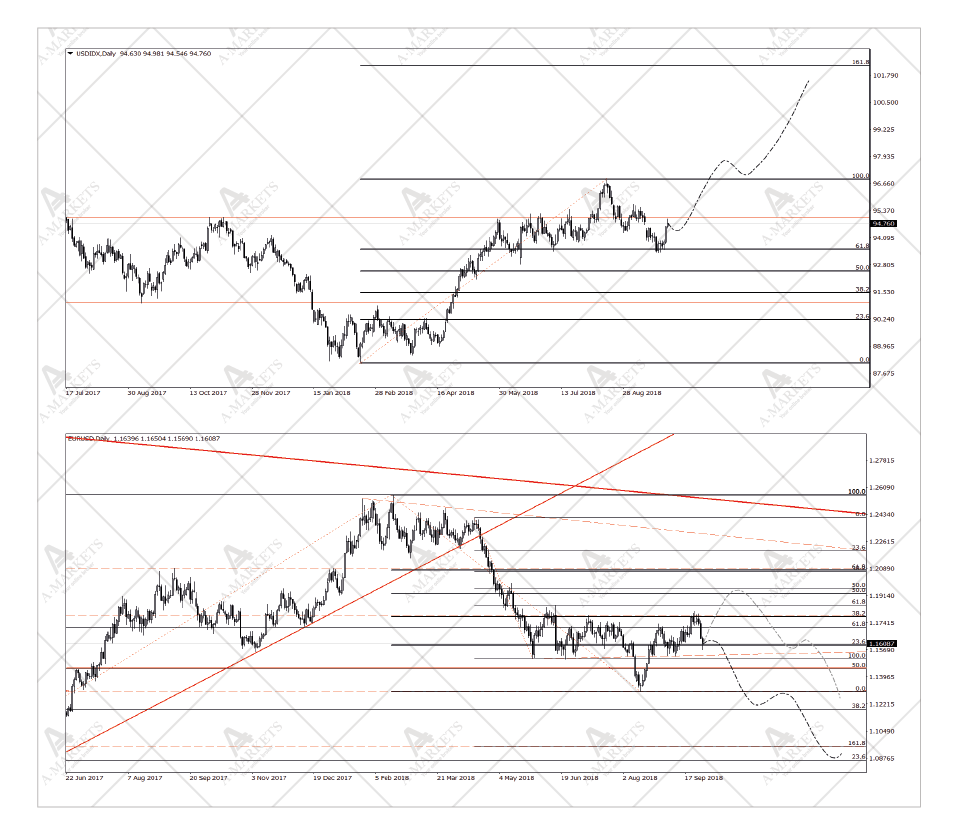 In the previous edition of this publication, we defined 1.176 as the level where it would be sensible to start re-building short euro positions, and there was an opportunity to do just that over the past two weeks. It is still unclear if EURUSD will manage to reach the 1.192-1.196 area, and the move remains probable. However, this is now highly likely just a retracement after the March-August downtrend. A month ago, the failed attempt to break 1.15 created too much noise to navigate through it immediately.

Yet it has become evident that the technical picture is converging with fundamental drivers. The euro has failed to exhibit any meaningful strength, and the move South might have already resumed. We would still allow for a jump in EURUSD, should there be a major surprise (Italy passing a credible budget law, for example). But we would use any recovery to add to the short positions, as levels below 1.10 seem imminent. The picture in the dollar index also confirms that view. The DXY has staged a broad recovery, and a break through 95.03 will open the upside to 97, with 102 as the ultimate medium-term target.

AUDUSD: keeps on suffering from weak China and metals. 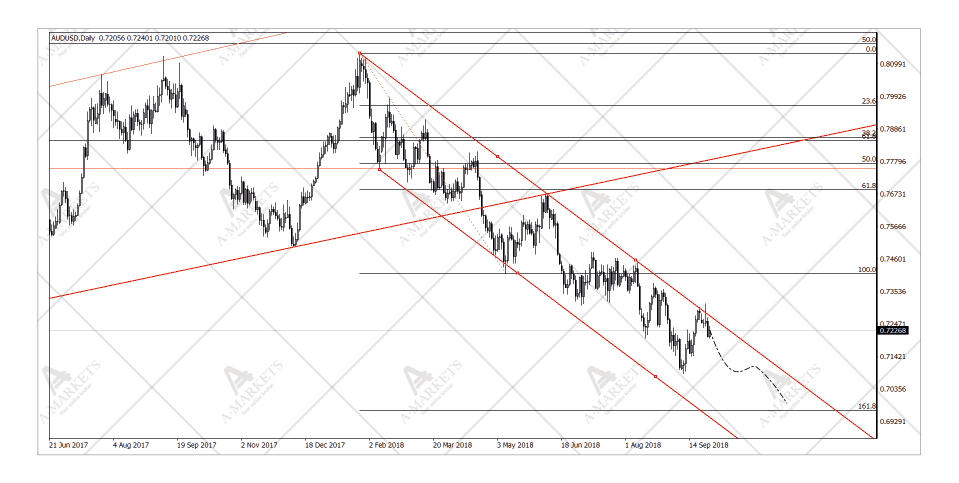 AUDUSD is probably the most stable and least volatile trend in the FX space. And, of course, it is in a downtrend. Our readers should be very familiar with the reasons for this to be happening, and, really, nothing has changed over the past month. China is dealing with a growing number of issues, with trade wars now being the main one. We expect the Trump administration to eventually slap tariffs on all of the imports from China, and raise some rates from 10% to 25%, as the president announced. There is a risk that the U.S. goes beyond trade measures and imposes additional sanctions, related to alleged attempts to hack the upcoming election.

On the Chinese side, the reaction has been quite strong. One of the very telling moves was the decision to actually lower tariffs on some imported goods. This is likely an attempt to support local profit margins. While U.S. trade restrictions have not yet kicked in fully, Chinese businesses apparently understand that they might not be able to bear with the new reality. Shorting the AUD is one of the preferred trades to get exposure to the slowdown in China. Another way is, of course, shorting the yuan itself, but one needs to be patient there. 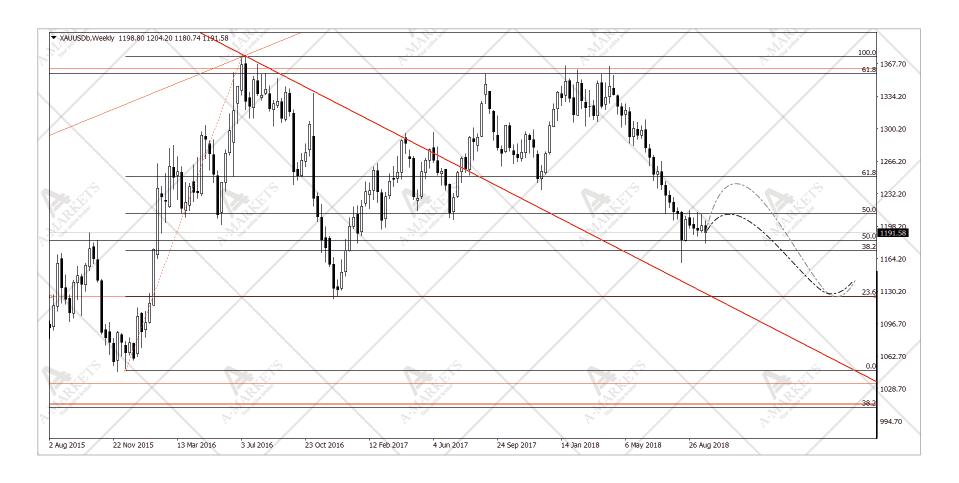 So gold keeps on amazing us. Just over a year ago, it seemed there was nothing standing in its way. XAUUSD broke the long-term downtrend, which is usually followed by a strong and lasting rally. However, the rally fizzled quite fast, and the prices did not even reach 1400. The entire precious metals block has fallen under severe pressure in April 2018, and the selling remains. We do want to stress the fact that the long-term downtrend has been cleared. This echoes with our fundamental call that Trump policies will eventually inflict notable damage to the dollar, and gold is likely to be used as a safe-haven.

But that’s a story for after 2020. In the short run, the picture remains negative. Much like the DXY and the EURUSD, it is not yet clear if the current corrective move has concluded, but it doesn’t have much space to run anyway. We believe that prices between 1200-1245 are a good opportunity to build a short position in XAUUSD. Speculative demand for gold is low, fundamental purchases are fully supplied. And we have rising dollar rates on the other side of the equation. Prices are likely going to at least 1126, with 980 being the most remote target.

We closed our USDRUB position at 69.9, have gone long USDZAR at 14.20 as indicated in the September report.